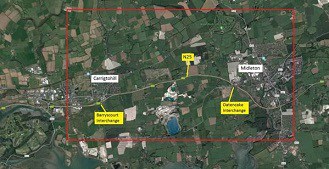 The N25 Carrigtohill Midleton Road Improvement Scheme has been proposed for a number of years by Cork County Council in conjunction with Transport Infrastructure Ireland (TII). The project is included in Project Ireland 2040 and the National Development Plan 2018-2027. The purpose of the scheme is to provide an improved transport infrastructure on the N25 between Carrigtohill and Midleton.

The primary objectives of the scheme as set out in the Phase 0 Project Appraisal Plan are as follows:

-To improve safety for traffic and vulnerable road users on the N25 between Carrigtohill and Midleton; and

-Improvement of transport and geographical integration and journey times on the N25 TEN-T Network and to implement a scheme which helps achieve the land use objectives set out in Regional and Local Area Plans for Carrigtohill and Midleton.

The N25 Carrigtohill to Midleton Upgrade project is classified as a Major Project (greater than €20 million) under the 2016 Project Appraisal Guidelines for National Roads.

The study boundary within which the scheme impacts should incorporate the area to the north and south of N25 including the towns of Carrigtohill and Midleton, the zoned development areas at Carrigtohill North and Waterock and the Cork Midleton Railway line.