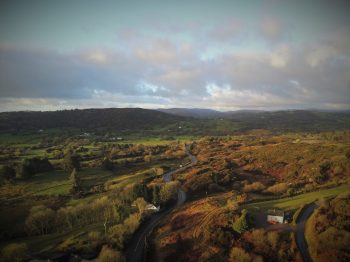 A story of conflict and sacrifice in the Irish War of Independence, 25 February 1921.

Cork County Council and Transport Infrastructure Ireland are pleased to announce the publication of an online Story Map to commemorate the centenary of the Irish War of Independence ambush at Cúil na Cathrach, which occurred on the morning of 25 February 1921, close to Baile Mhic Íre in west County Cork. The ambush, involving an attack by Volunteers of the IRA Flying Column against members of the Auxiliary Division of the Royal Irish Constabulary, took place at a winding section of the old N22 road in the townland of Cúil na Cathrach, approximately 11 km west of Macroom town. The Story Map sets out the historical context of the ambush and provides a narrative on how the ambush site was selected, the ambush strategy and how the ambush unfolded—including suspected betrayal by a saboteur. Detail is also provided of the two opposing commanders who found themselves in armed conflict by the fate of history.

The Story Map includes historical photographs, interactive mapping and links to further reading and resources, as well as a noteworthy vignette of Irish film history. County Cork, in 1921, was at the epicentre of armed rebellion against British rule in Ireland.  To mark the centenary of the event, it is hoped the Story Map will help raise awareness of the ambush at Cúil na Cathrach for both a domestic and international audience.

The online Story Map can be viewed at the following link: https://storymaps.arcgis.com/stories/d7e5d00d05b842f58c87d176d5b9a192 and is part of a suite of Story Maps prepared under the auspices of TII, available for viewing at www.tii.ie/technical-services/archaeology/storymaps/. The story map is also available in Irish: https://storymaps.arcgis.com/stories/075c2beea15642d78ea45b1afcc16d6e.