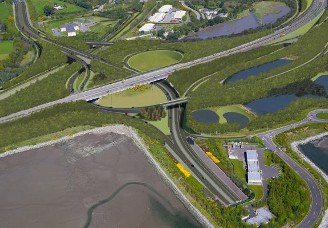 The Interchange at present comprises a Signalised Roundabout, which includes a Free Flow Overpass for traffic travelling along the N25 to and from Cork City.  Other traffic using the Interchange must negotiate the Traffic Signal Control Roundabout.

Core objectives may be summarised as follows:

1)    Improve capacity and reduce congestion through the Dunkettle Interchange.

3)    Separate local traffic movements from strategic traffic in so far as practicable.

4)    Provide separate and clearly designated lanes for each traffic movement with minimal weaving or crossover.

5)    Provide dedicated pedestrian and cycle connectivity through the junction area away from the main busy traffic corridors.

6)    Minimise impact on the environmentally sensitive sites within the overall construction area.

7)    Integrate with national, regional and local policy by improving capacity through the existing interchange and thus facilitate connectivity between the N8/M8, N25 and N40 strategic routes and linkage to potential Cork Midleton local rail station and park & ride options.